How We Found You by J.T. Lawrence 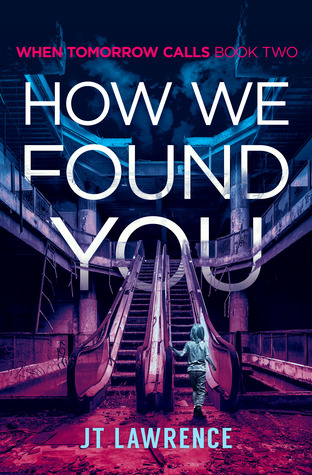 Title: How We Found YouAuthor: J.T. Lawrence
Series: When tomorrow calls (Book 2)Publication date: 18 May 2017 (Today!!! Launch day is TODAY!!)Read: May 11 - 18, 2015Genre: Thriller; Science Fiction (Futuristic)Mareli's rating: 4 StarsRecommend to: Have you read Why you were taken? Description: There’s something different about Kate’s four-year-old son. He wasn’t created the old fashioned way. Now a violent cult wants him dead and Kate will do anything to protect him – until they take her daughter.

In tomorrow’s world, Kate is haunted by a brutal past. Struggling to navigate a life that seems like an experiment in virtual reality, her paranoia threatens to consume her. But when someone tries to kidnap Mally, she realizes she was absolutely right to be afraid. With only hours to go before the cult's prophecy is to be fulfilled, Kate and Seth face more danger than they’ve ever imagined, desperate to keep him safe. However, the charismatic leader of the cult has other ideas, which puts Kate in an impossible position. Who will she choose to live, and who will she have to sacrifice? Amazon
Browsing through my Goodreads Read Shelf, I came to realize that I haven't read a series back to back in years. Oh what bliss, what a thrill - how quickly can the next one be available Janita Lawrence?


How we found you starts about 4 years after Why You Were Taken ended. Kate (she doesn't go by Kirsten anymore) and her long-lost twin brother, Seth (he still answers to Seth), are reunited and share an apartment with Kate's two small children, Mally and Silver. Life and all its trimmings in the not-so-distant-future in South Africa, can be obtained with the click of a button.

"Consumption used to be the name of an illness. Was it TB? Something to do with breathing: gram by gram, a disease that slowly consumed you. Consumption is a different kind of sickness now."

Some old familiar faces like Keke and Marko brace us with their presence as well. Keke is still the ultimate sniffer-dog and some of the best parts of this book, were the court proceedings where Keke was on Jury Duty.
Loved it. Somebody (come now Janita, I'm talking to you) should write a courtroom drama with holograms and Virtual Reality re-enactments and remote controlled jury-voting devices. During these procedures, we've met a new character, Zack. Hmmmmmm..... hard to explain this one. Do you know this guy:

If you know him, you'll know Zack. I have a lot of faith in him to become one of my favorite fictional heroes. But let's get back to our main character, Kate.
I like this Kate, she is a bit screwed-up, but hey - who wouldn't be after what she had to endure. As with Why you were taken, it is exactly this strong, realistic character portrayals that makes J.T. Lawrence a writing force to be reckoned with.
Kate should be thrilled to have two such beautiful children. I mean really, who wouldn't want to have a printed baby? So why is she so damn paranoid? Honey, trust your mommy-instincts. The Good Lord (although there isn't much evidence of any believe in the Supremacy here) gave you those instincts for a reason.

No one can be trusted, especially when it comes to your children. Kate's paranoia is rightfully justified when Marko and Keke uncovers that somebody is really trying to harm her children, especially Mally. As in Why you were taken, Kate turns into a fierce warrior queen who will stop at nothing to save her children.

How we found you is a fast paced sequel to an equally intriguing book and in my opinion (not that it counts for very much), it is even better. Maybe it's the endings of the two books. I remember when I finished Why you were taken, I thought the book could have ended a few pages "earlier". Just to leave you with a bit more anticipation. How we found you is more than making up for that. Talk about a cliffhanger.....

I received this book as an ARC from the lovely author and no, she did not have a gun against my head or a sword against my neck for a review.


Trivia!:  "How much is that doggy in the window?" Please, please can I have a Robopup?