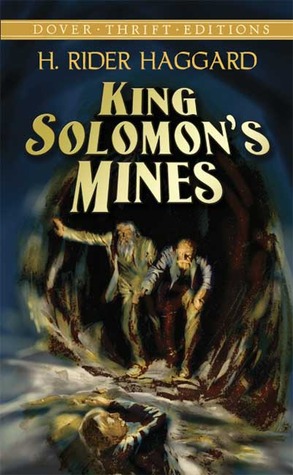 You know what I love about book reviewing and blogging the most? It gives you the freedom to google your favourite books and characters for hours and hours and if someone asks what you are doing you can quite honestly say: RESEARCH. (You might even glare at them over the rim of your glasses. For effect you know. Also make sure to have a pencil at hand. Again - for effect)

Afterwards, you might sound extremely clever and give lots and lots of useless information to anyone who would be interested in listening. (I strongly suggest that you keep your glasses down on your nose and have that pencil either in your hand or stuck in your hair).

That's enough useless information for now (you may either put your glasses down or place them in a more proper position, but hold on to the pencil for a few seconds more). Just one last thing:

Did you know: When Robert Louis Stevenson's Treasure Island was first published, H. Rider Haggard made a 5 shilling bet that he could write a better adventure novel. (You may now put the pencil down as well)

In 1885, Haggard published "the most amazing story ever written" - King Solomon's mines. It became one of the best selling novels of the nineteenth century. It is the first English novel set in Africa and is considered to be the genesis of the Lost World literary genre.

Quick blurb: This novel tells of the search by sir Henry Curtis, Captain John Good and the narrator, Alan Quatermain, for Sir Henry's younger brother George. He has been lost in the interior of Africa for two years in the quest for King Solomon's mines. The legendary source of the Biblical king's enormous treasures. The three companions encounter fearful hardships, fierce warriors, mortal danger and the sinister and deadly witch Gagool. Quatermain tells the tale of their struggles through unmapped Africa with touches of humour and excitement. (Goodreads)

I so love the phrase: unmapped Africa. That leaves the reader with an open imagination for the location of King Solomon's mines. Yes, there has been numerous speculation on the precise location of the treasures. Even in this story, we never know where Kukuanaland actually are. That might be anywhere in Africa. I do tend to favour the South of Africa more, but then again, I might just be biased and make my own conclusions.

Biltong: A kind of cured meat
Kaross: A coat made from the hide of livestock with the hair still on
Kraal: An enclosure for livestock
Kwagga: Sub-species of the zebra. Now extinct.
Koppie: A small hill. Also a cup.

Like I said, Africa is not for sissies. Yes, there are plenty of things to fear in Africa. Lions and elephants might not be the worst of your fears. And if you thought that the African witch doctor belongs to the 19th century, think again. They are alive and well and very, very active. http://witches.co.za/

King Solomon's mines has been on my book shelve for YEARS. Somehow, I just never wanted to read it. Mainly, because I never knew what it was about. That is why book blurbs and good book reviews are very important. No matter how old a book is, we as readers need to keep them alive. My wish for this book is that it will bring joy to many more adventurous minds and hearts in the years to come and that maybe one day all of Africa will remember to do as Umbopa promised to Alan Quatermain:

Remember to do as thou did promise: To rule judge; to respect the law; and to put none to death without a cause. - So shalt thou prosper.