Why you were taken by J.T. Lawrence 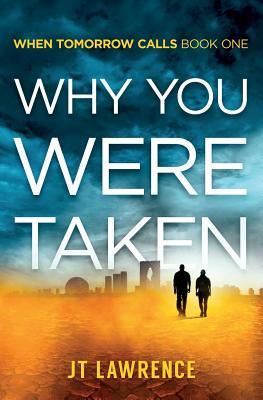 Title: Why You Were Taken
Author: J.T. Lawrence
Published by: Pulp Books
Publication date: 29 March 2015
Read: April 25 - April 30, 2015
Genre: Thriller; Science Fiction (Futuristic)
Pages: 358
ISBN:  9780620655583
Mareli's rating: 3.5 stars
Recommend to: Sci-fi junkies who love the thrill of something "different". J.T. Lawrence's fan-club (this woman can write!)
Description: In tomorrow's world prowls a creative and ruthlessly efficient assassin who won't stop until Kirsten is killed. A troubled woman approaches Kirsten with a warning and a key and is later found dead. Was the woman just another victim of the Suicide Contagion or is there something more sinister at play? The key leads Kirsten to the Doomsday Vault and a hit list of seven people - and her barcode is on it. Edgy and original, Why You Were Taken is a dark cinematic thriller that will keep you guessing till the last page. Goodreads

Nah, that blurb just doesn't do enough justice to this book. Let's try this one:


Jo’burg city is shimmering with a bitterbright tension, the perfect playground for a scarred, creative, and extremely efficient assassin.
Kirsten is a roaming, restless synaesthete: an awarded photographer with bad habits and a fertility problem. Her life has been defined by what she calls her ‘Black Hole’: a painful hollow feeling where her heart should be.
Seth is a brilliant chemgineer and loyal member of Alba: an underground biopunk Truther organisation that exposes corporate bullies and black clinics. He has the hollow feeling too, but fills it with other things, like the drugs he designs, and women in ridiculous shoes.
Kirsten and Seth don’t know each other, but they seem to be connected; they feel echoes of one another.
At once familiar and bizarre, adorned by litter bunting and broken pavements, South Africa in 2021 is beset by a relentless drought and a fertility crisis. When Kirsten’s journo friend Keke uncovers some cryptic information, they team up to investigate, and discover that Kirsten’s parents were actually her abductors, and that she is one of a twin.
A strange, muttering woman with dog hair on her jersey approaches Kirsten with a warning, and is found dead shortly afterwards. The police attribute it to the Suicide Contagion.
The warning leads Kirsten and Keke to the Doomsday Vault and a hit list of seven people – and Kirsten’s barcode is on it. The twins are re-united – ironically – by the poisoned list, but as the bodies of the other victims begin surfacing they realize how real their jeopardy is. Goodreads (Smashwords edition)

What makes a book a good read? I'm sure that all us have our own opinions and we can all make a list (because Bloggers just love making lists), but I only have 2 and they are either or (books with both are better than Christmas):

1. A book is written sooooo beautifully with such poetic prose and a mesmerizing story that you prolong the process of reading, for this book must last as long as possible. OR

2. There is nothing special about this book, except that it is extremely intriguing and keeps you turning the pages as quickly as possible for you need to know what is going on here.

BONUS: It is infinitely google-able

Why you were taken mainly falls under the second reason and the bonus point is a sure win.

Jo'burg 2021. (Google: Johannesburg, South Africa. And check out Zoo City by Lauren Beukes on Goodreads. It also deals with a "different" Johannesburg.)

Meet Kirsten. She's an award-winning photographer and a synesthete with a fertility problem. (Google: Synesthesia, but never mind all the fertility lingo. Nothing I don't know)

"How come those creeps are fertile, she thinks, when I'm not?"

Meet Seth. The brilliant chemical engineer who is a kind of James Bond agent for a Truther organisation who exposes corporate bullies and black clinics. Although he doesn't share the same dashingly handsome, suited, shaken not stirred appearance of James Bond, they do share the same libido. (Google: uhmmmm.....  just read the book. Similar to Kristen, I'm also a bit of a technosaur).

Kirsten and Seth don't know each other. But they both know a black hole and a persistent sense of loss.

The story is told through different characters, times and situations, all seemingly unconnected, but the pace is fast enough for all to fall in place at just the right time to keep you intrigued.

As the story opens, we immediately know that the main character, Kirsten, is dealing with a tremendous trauma that spins her whole life in a new direction. She finds herself questioning every single aspect of her past, present and future life. Her search for the answers to the never ending question 'why' leads her to people and situations she would never have imagined. Kirsten's character development throughout the story is what carries the plot. And spins it a bit out of control for me and cost Lawrence half a star. I've pictured Kirsten's character a bit like Casandra in The Librarians (yes, the red hair, beautiful features and something "strange" about this one, did have something to do with it), but she ended up looking like a seriously bad-ass Charlize Theron in Mad Max: Fury Road. (Yes, the shaved head and the ultimate-survivor-don't-mess-with-me attitude did have something to do with it).

But that's just my personal opinion and not necessarily a bad thing at all. In fact, I know it is exactly this type of character development and her reaction to unimaginable actions that puts Why you were taken in league with the big futuristic-thriller runners.

Lawrence creates a future that is not all that unimaginable. Some of her addressed issues are likely to become a lot more serious over the next decade: water and energy scarcity, population growth, hover bikes and other technology that will blow your mind and the big one - the human race's ever persistent quest to play God and to beat Him.

This book dealt with some serious morality issues that left me pondering that nagging question: How far will I go? If someone can hand me my greatest desire literally on a silver platter - will I take it? No questions asked? It took me a few days to decide.

Now that's what I want from a book! That's a good read.

Why you were taken is the first book in the futuristic suspense series 'When Tomorrow Calls'. The second book, How we found you will be available end of May 2017.

JT Lawrence is an Amazon bestselling, genre-hopping, female-protagonist-loving author (and playwright) based in Parkhurst, Johannesburg, South Africa. She is the mother of two small boys and a baby girl, and lives in a house with a red front door. You can follow her on Instagram, Facebook and Twitter. Just follow the links @ Pulpbooks
Other reviews on Why you were taken: