The author of The-100-year-old man who climbed out the window and disappeared, Jonas Jonasson's newest novel already promises to be as fun-filled and entertaining as its predecessor. I've actually struggled a bit with Jonasson's writing style when I first started The-100-year-old man. He's quite quirky with an atomic amount (no pun intended) of word-play. Same with The girl who saved the king of Sweden, but this time I am prepared and quickly got into it. The story opens with Nombeko Mayeki who was born in a Soweto shack in 1961. She's a rather clever girl and by the age of 14 she was already the manager of the latrine emptiers in South Africa's largest shantytown.
"They complained that their manager was talking politics. Wasn't it enough that they had to carry shit all day? Do they have to listen to it too?" I suspect this might be my #21 on http://bookriot.com/2015/12/15/2016-book-riot-read-harder-challenge/

Every parents' worst nightmare.......
A five year old girl is missing. Mommy was a bit tied up at work and late to pick Anna up from school and she vanished, without a trace. From the book description, I know she is returned one week after her abduction. Anna has no memory of where she has been, apparently that is only the beginning of the nightmares. I do hope the "week" will pass quickly, because my husband is constantly asking: "Did they find Anna?" I got this book for cheap-cheap on the daily specials on https://www.bookbub.com/home/

I've been meaning to read Henry James' classic ghost story The turn of the screw for a couple of years.Somehow the 'classics' just kind of disappear from my need-to-read-this-now list. It tends to be so looooong and sometimes downright boring to read it. And then I discovered Librivox! This is a free public domain for audio books.https://librivox.org/ Having somebody else reading the classics for you turns out to be quite a lot of fun! I've listened to a couple of novels already and definitely recommend trying it. I'm half-way through the reading of The turn of the screw and I am convinced that the "unknown" governess is missing a couple of screws. Flora and Miles are a bit creepy though.  I suspect they would have had a nice long chat with Cole Sear on the matter of seeing dead people. 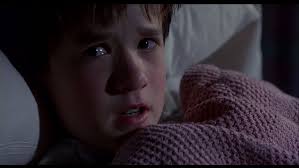