Some novels have these amazing opening lines. From that very first sentence, the book just has your attention and you start highlighting and making notes. The Nightingale also opens with an amazing quote and yes, I also highlighted it (as thousands of others did!) And then I've lost attention....

Up to around 14% it was nothing but cliches, stereo-typed characters were introduced and it was all sooooo melodramatic. 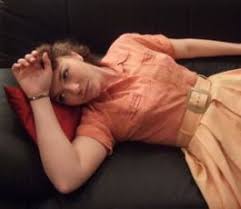 The story opens in Carriveau, France 1939. The plot mainly revolves around two sisters, Vianne and Isabelle. Vianne is quite content with life in the French countryside. Contentment is a word that Isabelle however never learned in the numerous schools she'd been expelled from. But then WWII strikes with a vengeance. And I was interested again.

This was the first novel that I've read by Kristin Hannah, but I don't believe it will be the last. Hannah's pen reflected powerful insight into a part of WWII that we don't always think of that much - the women who stayed behind. Not all of them were strong and had the courage to stand up for God and Country. Some of them did what they had to do to survive. Like Vianne. But I loved her in spite of everything. Or maybe rather because.

And then there was Isabelle. Beautiful, courage, sometimes downright stupid, Isabelle. "Isabelle had always simply reacted in her life. Someone left her behind; she followed. Someone told her she couldn't do something; she did it. Every barrier she turned into a gate."  She goes and join the Resistance where she volunteers to assist in hiding and shepherding downed Allied airmen across the Pyrenees to Spain.

Kristin Hannah's reflection of the Nazi occupation in France was handled with grace and a sentiment that although it didn't dampen those horrible events, it left the reader with sympathy for even the most unlikable characters.

This is a novel for everyone and a story that has to be read and remembered by everyone.