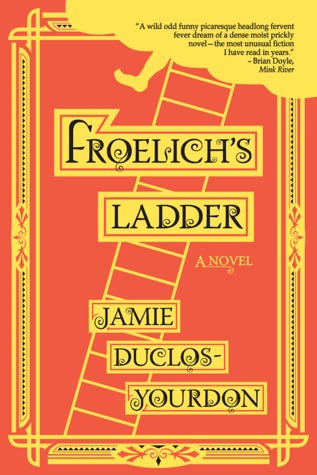 Title: Froelich's Ladder
Author: Jamie Duclos-Yourdon
Published by: Forest Avenue Press
Publication date: 09 August 2016
Genre: Adult Fiction
Pages: 248 (Paperback)
ISBN: 978-1-942436-19-5 (Paperback)
Description: Froelich nurses a decades-old family grudge from his permanent perch atop a giant ladder in this nineteenth century madcap adventure novel. When he disappears suddenly, his nephew embarks on a rain-soaked adventure across the Pacific Northwest landscape to find him, accompanied by an ornery girl with a most unfortunate name. In their encounters with Confederate assassins, European expatriates and a general store magnate, this fairy tale twist on the American dream explores the conflicts between loyalty and ambition and our need for human connection, even at the highest rungs. Forest Avenue Press
Mareli's rating: 4 stars
Recommend to: Readers/believers/tellers of Tall Tales

Froelich's Ladder is a Tall tale/Folk tale set in the Oregon Territory and features an eccentric cast of rather believable characters and grazing clouds.


Note: A 'Tall tale' is an account that is fanciful and difficult to believe. Normally accompanied by the following facial expressions and large amounts of liquor: One of the similarities between fairy tales and folk tales is that living quarters are never questioned. Whether it's a beanstalk, a tower, a peach or a shoe - we accept it as appropriate living arrangements.

In this delightful tale, Froelich finds himself perch atop the fourth largest ladder in the world, built by himself and his brother, Harald. After a feud between the two brothers regarding the two most fought over issues in recorded history (1. Who's in charge 2. A woman), Froelich jumped on his high horse, or in this case his high ladder, and could not be persuaded to climb down - come rain or shine.

Seeing that he was normally a bit under the weather, he maintained a large herb garden between the rungs for all his ailments. As the forest grew between the two brothers, they ended up relying on the only means of communication between them, TAP. Borrowing from Morse code, they used thumps and vibrations to form combinations of words. Until one day Froelich literally disappears into thin air (aka the clouds).

An element you find in folk tales, but not in fairy tales is that you can't always rely on magic to solve your problems. Sometimes you have to rely on the little grey cells. Enter Harald's two sons. When Binx one morning informs his brother Gordy that the weight of the world on his shoulders seems to be lighter, Gordy decides to embark on a quest to bring his uncle home.

Gordy's clever mind and wit gets him through a number of difficult situations. His journey interlaces with two spunky young women. One with a terribly unfortunate name who dresses like a boy pretending to be a girl at a later stage again and a girl who escaped from a locked tower who's reputation was the only currency she had left, except for her I.O.U.

In this nineteenth century Pacific Northwest landscape they encounter Confederate assassins (meet Dumb and Dumber), European expatriates and a store magnet who believes in the one-tenth men.


"You have to wonder whether it's the chicken or the egg with these people. Whether they become arseholes after taking power, or if being an arsehole had everything to do with it."

In a Wild West populated with immigrants, skittish Civil War veterans, a circus menagerie and a couple of murderers, will they be able to find their "happily ever after" in this tale of the American dream?

More importantly, will Froelich manage to escape the hungry clouds and finally get to bury the hatchet and lay the ladder down?

This was a fast-paced, clever witted novel that I enjoyed immensely. The underlying theme of alienation was played out well throughout the novel. It reminds the reader that we will always need to reach out to one another through whatever means and in whatever language.

After all, they sure did need each other in order to survive the Wild West.

About the author: Jamie Duclos-Yourdon is a freelance editor and technical expert. He received is MFA in Creative Writing from the University of Arizona. His short fiction has appeared in the Alaska Quarterly Review, Underneath the Juniper Tree and Chicago Literati and he has contributed essays and interviews to Booktrib. He lives in Portland, Oregon. Froelich's Ladder is his debut novel. Jamie Duclos-Yourdon

Special thank you again to Laura Stanfill (publisher) for giving me the opportunity to read and review this novel.

Froelich's Ladder will be launched on the 9th of August and Jamie will be touring nationally (US) and should you be fortunate enough to be in the region of the below mentioned locations, try to pay him a visit and learn more about his amazing debut novel.

You can find more reviews on Froelich's Ladder @:

Should you wish to ad your review to this link, please send me a link in the comment section and I will gladly ad it.