The Benefits of Death - Roderic Jeffries 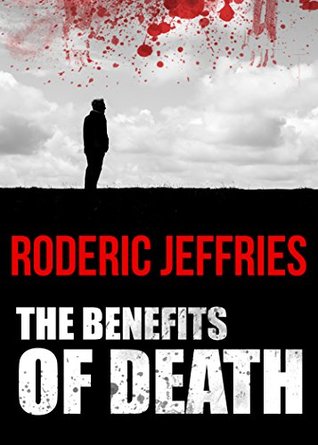 Title: The Benefits of Death
Author: Roderic Jeffries
Published by: Endeavour Press
Publication date: 24 June 2016
Genre: Mystery & Thrillers / General Fiction
Pages: 176 (kindle)
ISBN: 9781534893436
Description: There is no love lost between Charles Leithan and his wife, but with inheritance money at stake, neither will instigate divorce. So when she goes missing, the police are convinced he's responsible. Endeavourpress
Rating: 3 Stars
Recommend to: Cozy mystery readers and fans of Midsomer Murders

I received this book as an ARC from Netgalley and Endeavour Press in exchange for a fair and honest review.

What will you consider as fair? In Charles Leithan's opinion, life definitely was not fair. He has been unhappily married for years to a woman who is vastly known as a graceless woman and rather a female dog. Ironically, she spends her days (and Charles' money) on the pedigree dogs she breeds and shows. And then the bitch disappears. (I'm talking about the leader of the doggie pack here, but the wife goes missing as well).

If not for his father's screwed-up will, Charles would have long since been divorced from Evadne and in the arms of his beloved and bedable mistress, Mrs Breslow.

Charles Leithan has inherited a large sum of money, but the conditions state that the instigator of a divorce would forfeit the entirety of the money to the other party. In simpler terms: Due to a screwed-up will - if you screw around, you'll end-up being screwed.

You might ask, why doesn't he just go out and find an honest day's work? Good question. He does try to do a bit of writing, but it is considered as mediocre at best. (As all good authors know, you need to live life in order to be a good writer.)
And then Evadne and the bitch disappears. The police are suspicious of Charles and convinced that he knows considerably more about his wife's disappearance than he is letting on. (Now he can start writing):

"He would only be able to fulfill his promise as a writer if he paddled in the dung of life. Was this sufficiently dungy?"

The fact that Charles' visits to his mistress is becoming less and less secretive, doesn't help his dungy situation much. It is clear that he is no longer scared of his wife (she basically scared the living daylight out of just about everybody, her staff turnover resembled a merry-go-round) or of being caught out. Unbeknown to Charles, Evadne had her suspicions and had hired a private detective who couldn't proof anything.

The police, however, does know about the private detective and they are convinced that it was just extra ammunition in Charles' collection of antique pistols (incidentally, one does go missing). It's not long before the police thinks they've got the case cracked. Believing they have solved the mystery, the police bring a murder charge before a jury - without a body.

What do you consider as honest? If honesty and the truth-shall-set-you-free are important to you in a novel, you will find The Benefits of Death highly frustrating. There's a lot of not-so-honest people in this story. Luckily, it was exactly that twisted idea that sold the story to me.